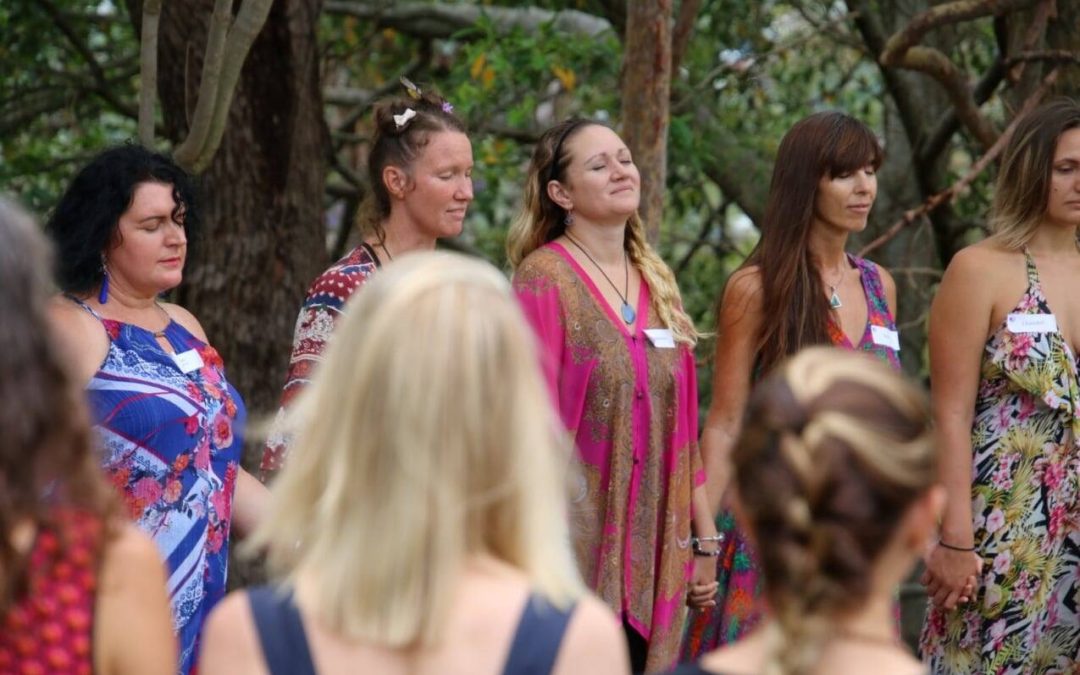 As Janet says in her beautiful sharing – this is the lineage which Women’s wellbeing is Built upon – and this is why we had the flame within us to Rebirth her this year – 2020.

When women gather together on land – aligned with the stars and the moon – the effects ripple throughout the earth and throughout the hearts of many this day I will remember in my heart for a long time.

I found myself sitting in a room in north Brisbane, in a circle of about 20 women being led by a tiny Jewish American woman who had me enthralled. I both feared and admired her for her skill.

I was timid. Scared, intimidated by the women around me who were all so… interesting. All kinds of women.

Some of them twice my age,

She shared the guidelines.

the only woman who speaks is the one with the talking stick,

I felt like I had tapped into an ancient cell memory of something that was yet unborn inside of me that I had known and yet not known.

That weekend was a profound initiation for me into the world of women’s circles, a deep transformation and a deep opening occurred for me personally. The woman who invited me has become a dear, lifelong friend Delicia. I met another friend Pamela, whose close friend was Robyn, both as well, life-long friends.

The four of us went on to meet about once a month with other women who were already holding heart circles. And when we came together, the same protocol was engaged – whoever had the talking stick spoke, no judgement.
Pure acceptance.
These guidelines would become a lifelong practice to me.

And as the years went on our friendship deepened through these circles. We had many years of holding each other through times of devastation, times of loss, hardship, deaths, parenting, celebrations.

It really became our core group holding each other in the presence of this beautiful tender heartfelt, loving embrace each night, and then we’d have tea and cake, or dinner, soup whatever afterwards and hang out… and laugh a LOT!

In this group there are about six or seven couples, and we all had birthdays in every month of the year. So at least once a month we would also get together for a gathering – so many crazy parties, it was such a fun and formative time.

The men in the group had started Men’s Well-being Association around 1997 and were well on their way in establishing a large men’s community by the late 1990’s and early 2000s some 20 years ago.

So quite a strong knit little group was formed and we as women would continue to meet sometimes up on Delicia’s land at the back of Mullumbimby and we have beautiful times together. Mud parties, naked sometimes!

It was such a bonding period, and we became each other’s lifeline in many ways. And then I remember one day in the early 2000s, and I was over at Pamela’s house.

In walks this short, sexy, sassy formidable looking woman in her late 40s, early 50s with bright red hair. Wearing a lime green business suit, or purple perhaps it was? In high heels. Donned with every kind of bauble you can think of and necklaces and bangles and bracelets and earrings dangling and full face of makeup.

She was fascinating. I was quite intimidated by her I have to say.

She was … our very own Diane Ryan. The late Diane.

But as I got to know Diane over the years, I came to feel such a deep and profound love and respect for this woman. In time she joined our group for gatherings.
She’d come from years of coaching where the approach was quite directive, as opposed to our approach which was very non-directive – just letting a woman open up, to be seen, to allow. It’s enough just to witness a woman speaking her truth, acknowledging her and supporting her.

It didn’t take long for Diane to turn towards our way and really embrace this ethos and in fact become a passionate advocate of this non-directive way of supporting women unconditionally. This that has become the foundation and the fabric upon which WWA was built.

As the years went by during those late 90’s and early 2000’s…. everyone was saying ‘when is a Women’s Wellbeing going to happen? What about the women?’

Well, it was Diane with Pamela who stepped in and said right, we are going to do this. They took it by the horns and registered the association. Of course, once they did that, we said – hang on, hang on, we all started this! We want to be part of it.

So around 2001, I arranged with Yaro Starak to train us all in running groups. He was heading up Brisbane Gestalt Institute, along with his belated wife, Maria. He had trained the men to run men’s groups, which then went on to become ‘Common Ground’ men’s groups and we wanted in. We all took part in that training and then we birthed Womanhood. I wrote the bones and Dianne and Pamela Rosalynd built out the flesh and they, along with Robyn Isaac and Norma Whitley, ran the first Womanhood groups.

And a lot of the ladies who are present here today were at some of those beginning Womanhood groups. And I think all of you will attest to the fact that your lives have been changed dramatically from that.

Those early years of countless women’s circles, those circles where we were brave, we were bold, and we laughed a lot and so hard, those circles were woven with the fabric of this same ethos – of supporting one another, of safety, no judgement.

And this has never been broken.

And now many women, these women on this committee today and many before stepped forward and brought with them their threads of hope, of inspiration, of creativity, of love and through their very presence have woven their own individual quality into this great weaving that is Women’s Wellbeing Association. We are small, but we are here.

And we thrive through being heard and having the courage to stand up and be heard.

And you know I wouldn’t be standing here if it wasn’t for Diane, because she was the one who said to me, Janet, you’ve got to go out and do your own work. She saw something in me that I didn’t see.

And every time I came to facilitate at Everywoman Gathering, I was terrified. But I did it. You grow through mastering your fear and stepping out of your comfort zone.

And that was Dianne. She could look into you and see that something special inside of you and call it forth through her love and kind words.

And I had stepped back by then, in terms of the committee side of things and a lot of the ladies here, stepped forward and a lot of other ladies who are not present stepped forward. I commend Women’s Well-being Association, I commend these ladies to my left, who have put countless hours into the Association over the years – Becs, Caitlin, Bronny, Kathy, Kathryn, Penny, all the past presidents and committees.

For continuing to hold the torch and continuing to connect to and embrace the force of Love that is this community. And now, to the new Committee, to be willing to allow, what is no longer needed, to be let go, and to come through to new inspiration, to rebirth this new phase for WWA, which is just so incredibly exciting.

I’m so proud of you all and I feel very humbled because it’s really Diane, who was the one who took everything, took the bull by the horns and you all that have made Women’s Wellbeing what it is today.

Diane was a visionary, and a rare bird.

If she were here today, she would notice every single one of you. She would see into each of you – she would be able to look at you and know where your pain has been, get a sense of what you need, to know how you’d need to be supported. She would have the right words to say to support you through whatever crisis you were going through. And in that she taught us. She was really, really an extraordinary amazing beautiful, sexy, sassy, crazy woman. She made me laugh. She made me cry.

And that’s what this is about.

We are here as women together. United.

If you’re here today, you’ve been drawn into the ethos of Women’s Wellbeing.

YOU now are part of this fabric that is continuing to be woven, that started way back in the early 90s, almost 30 years ago now. Each of you are a thread that weaves this magic. It is a living growing organism.

So this story is the lineage, upon which Women’s Wellbeing, was built on.

And I think it’s good, just like our own ancestors, to know our ancestral line, so that we can understand ourselves.

Then you can start to somehow feel your own ownership of it. Because this is yours. This is yours to have.

And I see it over and over in the continuing woman’s work that I do, that when women sit in circle, when they sit with each other in a cradle of safety, things happen. It’s the answer to so much of the isolation that women feel in their lives now.

We need more and more of what WWA has to offer.

Because when we come together as women and we don’t feel threatened – we may be scared but we feel safe enough – that’s when mountains move in us and around us. We need to feel safe to grow. And when that happens, we can start to relax, and then transformation can happen. And that’s what WWA is about.

I’d like to complete and ask you this question….

How would your life be different?

If you were, as a younger woman were invited into a circle of women, women who accepted you, where you felt safe, you felt trust, a place where you could just be yourself.

And where you would witness and observe, all the other women being themselves.

Women who you could aspire to.

Women who took you under their wing.

Women who you could go to, to seek help and support from.

Women’s Wellbeing really is the opportunity for us to step in and to make that happen. For each other, for our sisters, daughters, sons, husbands, mothers and fathers. For ourselves and our community.

I wish you a blessed day.